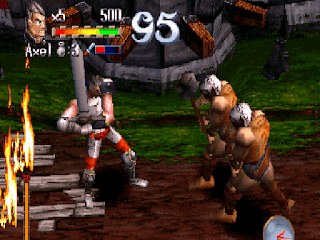 Genre: Action
Perspective: 3rd-person, Side view
Gameplay: Fighting
Setting: Fantasy
Published by: Funsoft GmbH
Developed by: Toka S.a.r.l.
Released: 1998
Platforms: PlayStation (PSX, PS1), Super Nintendo (SNES)
The stealer of souls Marlock stole the king, Tokavia is in terrible danger, and no one but you can save the world. Dangerous and dark times have come again, times of magic, mysticism, fear and cruelty. The diabolical deeds of the dragon Thatcher, who ruled the world, which suddenly became literally shrouded in fog, and the animals practically disappeared. But the tyrannical rule is over and, it would seem, all the dangers are behind... However, enemies hiding in some places have survived, so, brave warrior, you have someone to fight with. One way or another, you need to clear your precious homeland from hordes of nightmarish mutants and people from the other world. Battles mostly take place on the winding roads leading to Marlock's lair.
This side-scrolling adventure platform game is well-executed graphically, the animation is simply superb, the only pity is that the fights take place in very narrow spaces with limited room for maneuver. Each section of the road is separated, as it were, by a cordon - a magical wall that cannot be passed until you defeat all the enemies in the zone.
Character control is good, but for a successful attack you need to take a comfortable position, you can also select a warrior, automatically aim him at the enemy and attack. You have a lot of weapons at your disposal, they are scattered everywhere, as if waiting to be picked up. And you will chop so many heads that you can play bowling with them. But if the weapon is used too often, then it stops working, and you are left with only your bare hands, and, well, some kind of magic. However, strike combinations can be no less effective than weapons if used correctly. Yes, and magic produces a very impressive effect, but how could it be otherwise in the Middle Ages! You can not do without a fly in the ointment. The action often becomes monotonous and boring, and often quite meaningless. But if you like to frolic, look at alligator people and much more, then the Legend will satisfy you.