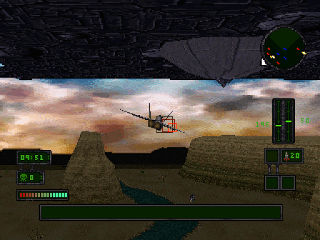 Genre: Action, Simulation
Perspective: 3rd-person
Gameplay: Arcade, Shooter
Vehicular: Flight / aviation
Setting: Sci-fi / futuristic
Published by: Fox Interactive
Developed by: Radical Entertainment Inc.
Released: 1997
Platform: PlayStation (PSX, PS1)
The space alien theme is one of the most popular and enduring in the video game industry. So Fox Interactive decided to make its next contribution to the development of the genre. As you might guess, the plot is based on the wonderful film of the same name starring Wesley Snipes. There is nothing surprising in the fact that this very dynamic picture has made its way to the screens of game consoles. Many of the film's plot moves are simply borrowed for the game (and some fragments are included in the demo plot and other episodes of the game), but the game action, of course, is organized in a completely different way.
The game is based on dogfights between terrestrial military planes and alien fighters. You control the actions of the main character, very similar to Captain Hiller from the movie. You do not see him, but you often hear him talking to the commanders of other military aircraft. Your main goal is to destroy the main alien airships; for this, as in the film, you need to hit the projectiles directly into the combat mechanisms of the enemy. Unfortunately for Earthlings, the enemy is not easy at all and does everything possible to complicate your task.
Combat enemy ships are surrounded by a force field impenetrable to your weapons; this field also extends down and can be a trap for you. How to deal with such an enemy? Fortunately, even the aliens couldn't foresee everything: some of the defense generators on the bottom surface of their ships are not protected themselves, and if you manage to disable them, then the protection will collapse. Then the main gun of the ship, located in its center, will open for you. This is where you need to release a striking projectile ...
On your way to success, you need to fight against a lot of small fighters that spot you with their lasers. You can shoot them with onboard machine guns or hit them with projectiles. At the same time, carefully monitor the time counters on the screen: when the time runs out, the main alien ship will destroy all life (including you)!
The action takes place in various areas of the globe - Moscow, Washington, Paris, New York, the Grand Canyon, etc. In the pauses between battles, you can conduct training battles with your unit comrades. If you master the control system of the aircraft and its devices, if you learn to closely follow the current information on the screen (radar, sensors, etc.), then luck may smile at you.

Brief description of objectives in missions

The general principle of detecting an entrance to a secret level is as follows. At the current level, it is necessary to detect a hyperlink tunnel. Then, using the radar, you must follow the direction of the white arrow that appears on the screen.