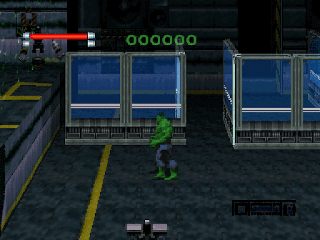 Genre: Action
Perspective: 3rd-person
Gameplay: Beat 'em up / brawler
Published by: Eidos
Developed by: Attention to Detail Limited
Released: 1996
Platform: PlayStation (PSX, PS1)
The popular Marvel comic book hero, The Incredible Hulk, comes to PlayStation in an isometric Beat 'em Up with platforming elements - The Incredible Hulk: The Pantheon Saga. The plot of the game is as follows: for some unknown reason, the Hulk is kidnapped by the heroes of ancient Greek myths, from the so-called Pantheon, but instead of responding with force, the Hulk begins to "make friends with them" and as a result, a team of cool heroes comes out, where the Green Giant is in the first roles. The Hulk will have to fight through more than 13 stages, five levels with hordes of enemies, usually with his fists and feet, and after accumulating enough energy he uses special moves like Vortex Spin or The Floor Hammer. Sometimes, when the turmoil reaches its peak, the Hulk will call for help from one of the members of the Pantheon, among them Atlanta, Ulysses, Ajax or Hector. From time to time he has to fight level bosses such as Piecemeal, Trauma & Lazarus or The U-Foes. The ability to regenerate allows the Hulk to regain strength and heal wounds, but this happens quite slowly. Overall The Incredible Hulk: The Pantheon Saga isn't the best superhero game, the graphics and gameplay are below average, and the Hulk himself is quite clumsy, but the ability for a comic book fan to fight for their favorite hero should mitigate such small things, especially a different, personal game. about the Hulk, it was not made for the PlayStation, which is a pity.