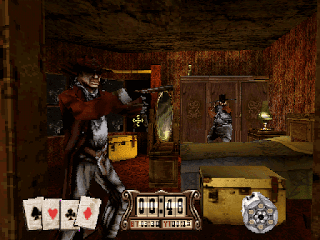 Genre: Action
Perspective: 1st-person
Gameplay: Arcade, Shooter
Setting: Western
Published by: Ubi Soft Entertainment
Developed by: Rebellion Developments Ltd.
Released: 2001
Platform: PlayStation (PSX, PS1)
In the role of Jesse James, you have to make your way with the right Colt in the spirit of the game from Namco - Time Crisis and the like through the corpses of insolent people in the vastness of the Wild West. You and your partner Cole Younger have come to one of the cities of the Wild West to pick up Zee, your girlfriend and then go on an adventure. But fate decreed otherwise, during the shootout, Cole was killed, and Zee was kidnapped by bandits. Now you have only two goals - to avenge your friend and save your girlfriend. The game has similar gameplay to Time Crisis - time limit, the ability to take cover using a special controller key. Also in the game there is a full-fledged story mode which is diluted with simple puzzles that are solved by a couple of accurate shots. In addition to this mode, you can play mini-games or practice in the arcade mode. The inspiration for the game for developers was the figure of the legendary American criminal of the 19th century, Jesse James, a controversial personality, which some call Robin Hood, others as a murderer and robber.
‹
›
Home
View web version