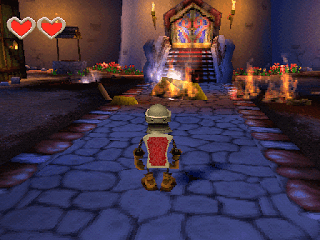 Switch "Pad 1 Type" to Analog. Character movement keys - T,G,F,H.
Genre: Action, Adventure
Perspective: Behind view
Published by: Midway
Developed by: Point of View
Released: 2000
Platform: PlayStation (PSX, PS1)
An interesting idea, which was not destined to see the light, but it's a pity. The game actively uses the card theme, that is, you have to play as a deuce of hearts and save your kingdom from the evil jack of spades. Sometimes it is surprising the amount of work done, which in the end turned out to be of no use to anyone. Lots of playable levels and good design - this game could easily compete with other 3D platform games.
‹
›
Home
View web version