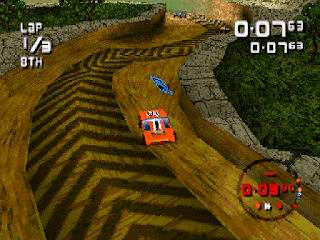 Genre: Action, Racing / driving
Perspective: Behind view, 3rd-person
Interface: Direct control
Vehicular: Automobile, Track racing
Published by: Mindscape
Developed by: Supersonic Software Ltd.
Released: 1998
Platform: PlayStation (PSX, PS1)
Racing game with beautifully executed cars, excellent tracks, polygonal graphics. But the main feature of the game is the "computer" racer - artificial intelligence AI. The computer, as it were, is watching your style of racing, remembers mistakes and miscalculations and uses them against you. But you can also watch other racers, study their style and "little tricks" and then take this into account when competing with them. The AI ​​is really good and the ability to actively learn while racing against the "computer" is very interesting and fun.
Racing routes are located in 12 different regions (Jungle, Wild West, Metropolis, etc.) and are largely determined by your choice. The tracks are difficult - a lot of hills, climbs, dangerous descents, jumps, sharp turns - in general, everything you need! Each of the 8 cars has its own characteristics and characteristics that must be well studied, otherwise the race will not be won. Multi-Player mode allows up to 4 players to play at the same time.
This game should appeal primarily to fans of the Rock 'n Roll Racing game from 16-bit platforms (primarily game perspective, dynamism and tracks) or the Micro Machines series of games.