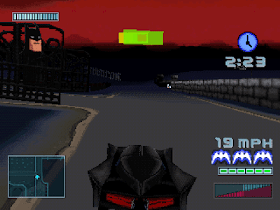 Genre: Racing / Driving
Perspective: Behind view
Published by: Ubi Soft Entertainment Software
Developed by: Sinister Games
Released: 2001
Platform: PlayStation (PSX, PS1)
In terms of plot, the game repeats individual episodes of the animated series The New Batman Adventures, but he will fight the villains without getting out of his Batmobile for 51 missions. But this is just a storyline: in free play, you will have the opportunity to control not only Batman, but also his partners: Nightwing, Batgirl and Robin. Also, the opportunity to try out the dark side of the force in the face of the Joker, Poison Ivy, Two-Face, Scarecrow, Croc and lesser-known villains such as the Clock King, the Mad Hatter and Scarface should not be dismissed. Each hero and villain has their own vehicle equipped with their own weapons, whether it's Batman's regular Batrang or the Joker's laughing gas.
‹
›
Home
View web version