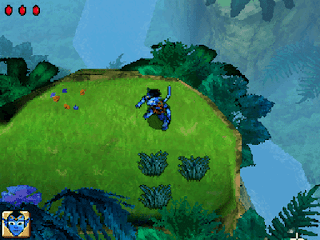 Genre: Action
Perspective: Bird's-eye view
Setting: Sci-fi / futuristic
Published by: Ubisoft
Developed by: Ubisoft Divertissements Inc.
Released: 2009
Platform: Nintendo DS (NDS)
In the distant future, earthlings have exhausted the resources of their native planet and are now striving to seize the gifts not of the Earth, but of Pandora. The peace-loving Na'vi, the natives of Pandora, live without technology, in harmony in the beautiful world of the wild. What will happen to the fragile world of blue-skinned Na'vi giants with long tails and huge green eyes when Earth's man-made armada hangs in the skies of their planet? How to save humanity from resource starvation and, at the same time, not destroy the biological civilization of the natives? Which civilization will eventually come first in the race for survival? Players will be able to get answers to these questions by standing on one of the sides of the conflict and building the future of their nation with their own hands.
‹
›
Home
View web version