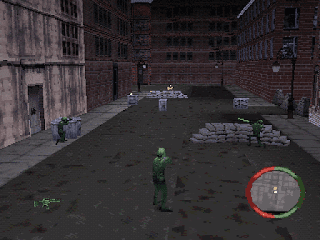 Genre: Strategy / tactics
Perspective: 3rd-person
Gameplay: Shooter
Vehicular: Helicopter, Naval / watercraft, Tank
Published by: 3DO Company
Developed by: 3DO Company
Released: 2001
Platform: PlayStation (PSX, PS1)
The Tan army (browns) secretly built a weapons factory, of course, in order to destroy the Green army. You must use every opportunity and destroy the Tang weapon factory. Army Men World War: Final Front introduced the ability to fight on land, under water and in the air, using cars, motorcycles, submarines and even assault rafts, which greatly added excitement and variety to missions. The game has 15 single and 16 multiplayer maps, plus an editor to create additional maps in 2-player mode. In addition to a single passage or a confrontation mode, there is the possibility of a joint passage of the game.
‹
›
Home
View web version