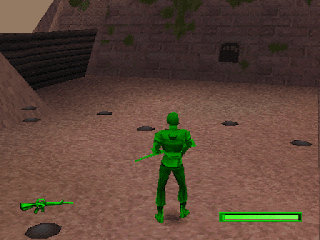 Genre: Action
Perspective: 3rd-person
Gameplay: Shooter
Published by: 3DO Company
Developed by: 3DO Company
Released: 2000
Platforms: PlayStation (PSX, PS1), Nintendo 64 (N64)
The sergeant and the Bravo Company managed to thwart the Tan Army's first attack, but can they do it again? General Plasto has teamed up with Brigitte Bleu, the fiendishly treacherous Blue Spy, to destroy the Green Nation once and for all. The adventure continues as the Sergeant and Vicky fight through pools, under beds, and across desktops to the final push against Plastro and his troops. The game has become noticeably better, both in terms of graphic design and music, but the storyline, in essence, has not changed. From the very beginning, the brown army and the green army were in a state of confrontation. At the same time, the greens fought to achieve peace, and the browns dreamed all the time of taking over the world and subordinating it to their power in order to establish an iron order. Each had its own trump cards. So, for example, the greens have excellent helicopter troops, and the browns have a very large army, always ready to pounce on the enemy. They use various insidious methods, and their leader, General Plastro (however, like Colonel Grimm among the greens) always seeks to resolve all issues by military means, and is not at all inclined to peaceful negotiations.