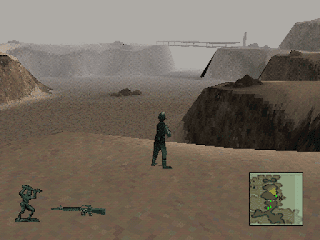 Genre: Action
Perspective: 3rd-person
Gameplay: Shooter
Published by: 3DO Company
Developed by: 3DO Company
Released: 1999
Platform: PlayStation (PSX, PS1)
Little plastic soldiers have always been a collector's item for war gamers, and video game developers have taken advantage of this by creating a great strategy game for PC. Lead game designer Keith Bullen didn't stop there and took on the development of the PlayStation version. This action-strategy was originally supposed to be completed at the end of 1998, but the end of the game was slightly delayed. By design, the game consists of numerous missions, during which you have to free your plastic friends, infiltrate radar stations, and destroy enemy soldiers and equipment. You have a rifle in your hands, but by going through the tasks, you can gradually acquire more decent weapons: bazookas, mortars, flamethrowers, grenade launchers and minesweepers. Not only foot battles are coming, because there are a lot of different vehicles at your service: Half-tracks, Jeep, Cargo Truck and even tanks. Battles look very expressive, fragments of plasticine fly in different directions with each hit, and sometimes soldiers simply melt, especially if they are heated with a flamethrower!
The figurines are very expressive and picturesque. So Sarge, the central commander-in-chief of the greens (his opponents are browns), all the time assumes classic military poses, can lead (like Chapaev) his troops into the attack, owns any weapon and famously drives all the cars. Imagine a picture, bullets whistling around and shells, and you are rushing through a minefield ... It's simply breathtaking, and yet you still have to make reasonable strategic decisions, otherwise you will never cope with the task. In addition to the single player mode, there is a two-player mode in the form of deathmatch or mutual assistance.

The first and, perhaps, the best weapon with an unlimited supply of ammo and an almost unlimited radius of destruction.

Pretty stupid weapon, shoots in bursts, but runs out of ammo quickly. The biggest drawback is the limited damage radius. Browns are almost all armed with machine guns, and therefore it is easy to deal with them, and you can easily dodge their fire.

A very powerful and effective weapon that allows you to solve almost any problem. There are a lot of grenades on the level, but when you throw them, aim just below the crosshair of the sight, otherwise they will simply fly over the target. Check how many grenades you have before taking the crate, where there are always five. If you already have 9 grenades, you can take only one, and for this it is not worth wasting precious seconds.

A very powerful defensive weapon. If you decide to retreat, mines can come in handy and stop the advancing enemy.

Very good against tanks, hard to hit accurately, but three good shots are enough to destroy a tank. It is useful to practice properly, while throwing grenades from cover is much more effective. Other targets should not be fired from the bazooka.

Something like a long-range grenade launcher, but it shoots very slowly. Use to destroy targets that cannot be thrown with a grenade or destroyed with a rifle.

It looks very impressive on the screen, but it is of little use. Almost like an automatic. After all, you need to attack the enemy in such a way that he cannot hit you, and with a flamethrower you will have to go out into the open and, therefore, you will be more vulnerable.

With it, you can set mines and also neutralize them. Good stuff, might come in handy.

Heals up to 30% of damage taken by Sarge.

Hollow heals all damage taken by Sarge. When you have lost up to half your health, use a small first-aid kit, and if more is lost, then use this first-aid kit.

It is very necessary for the successful completion of almost all missions. Sometimes you will learn how to get through the minefield, but often you will learn much more.

It sounds nice, but it's not too much use, since Sarge, like an x-ray, shines through almost everything with his scanner (in the lower right part of the screen). But it can come in handy if you find yourself in some fenced area where visibility is limited.

Single shot enemies act like real snipers and are extremely dangerous. Their range is as good as yours, and they can take out Sarge with a few well-placed shots. It is better to dodge their shots by somersaults to the left or to the right. First of all, in any situation, destroy the snipers.

Pretty simple targets as they are easy to see on the radar screen! Moreover, they give themselves away when they open fire long before you get to the lethal distance. And when you get under fire, roll left or right, then the enemy will miss or take minor damage. And in the interval between bursts, you can easily eliminate the enemy.

They move quite quickly and pose a serious danger, although they themselves are very afraid of grenades (well, rightly so). Your best bet is to move away from them, dodge the fire with side rolls, and then finish them off with your rifle from a safe distance. These are not machine gun nests for you, here you will have to master rather complex maneuvers.

These guys are very dangerous and throw grenades at the first opportunity. It's best to finish them off with long-range sniper fire. But you can slap in a brazen and from a medium distance, since grenades have a small radius of destruction. Even if a grenade falls at your feet, you just have to perform a somersault to the left or right, and you will be safe (you are unlikely to be able to simply run away).

Do not climb into the fire yourself, and if you already hit, then immediately bounce to the side. The less time you spend in the fire, the healthier you will be! They, like machine gunners, can only get you at close range, so just move away, or even better - destroy the enemy with a grenade.