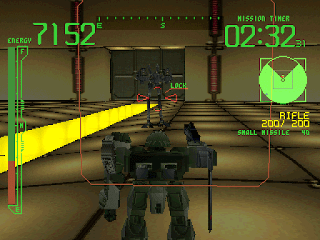 Genre: Action
Perspective: 3rd-person
Gameplay: Shooter
Vehicular: Mecha / giant robot
Setting: Sci-fi / futuristic
Published by: Sony Computer Entertainment America Inc.
Developed by: FromSoftware
Released: 1997
Platform: PlayStation (PSX, PS1)
This pure Action offers a wide range of gaming options. Very clear, bright, three-dimensional graphics create a very realistic world. But that's not the point. You can choose from a huge variety of parts and build your own robot, after which you can color it and improve it as you play (for this you need to successfully complete the assigned tasks for the corresponding reward)! The entire history of the development of the gaming industry, from the 8-bit computer ZX SPECTRUM, shows that games in this genre are most popular with real gamers.
In split-screen 2-player mode, players control heavily armed robots of their own design. The levels are large, filled with houses, trees - there is where to hide. You can jump on the robot into the air, quickly slide to the side - you just have to turn on the jet engine. The 2-player mode is most interesting in the "Link" option, although it is practically unattainable, because. requires 2 set-top boxes, two TVs and 2 CDs! But it creates an amazing scramble effect (like all games when using a jumper cable). In this case, your opponent will not be able to see your position, as in split-screen mode.
In "Story Mode" (single player), you are a bounty hunter, getting into various dangerous situations and destroying enemy robots. The player starts with a fixed number of credits (money) with which he must build a robot according to the mission goal and his preferences. If you spend a lot of money on your legs, you will run fast, but there will not be enough money for weapons. If you overspend on weapons, you will turn into a "sitting duck". Of course, after completing a certain number of tasks and receiving a reward, you can improve your offspring, but be prudent! In addition, you will have to fork out for the repair of your pet after fierce battles.
The missions are very difficult and dangerous, you will need a lot of weapons and ammunition. And while single player mode takes place in fairly narrow corridors, you can use the jetpack to quickly elude the enemy or fly up to the ceiling for a better view. It looks like Armored Core will take its rightful place in your collection, displacing some of the giants of this genre.
‹
›
Home
View web version