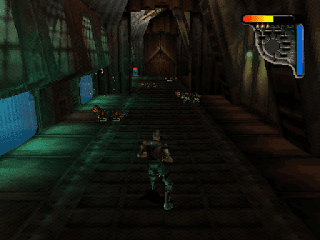 Genre: Action
Perspective: 3rd-person
Gameplay: Shooter
Setting: Sci-fi / futuristic
Published by: Activision
Developed by: Neversoft Entertainment
Released: 1998
Platform: PlayStation (PSX, PS1)
This game has been in development for a very long time. It was redesigned in the making, originally conceived as a one-man Action/Adventure game with none other than Bruce Willis as your sidekick, it gained new life when it was redesigned so that you now control Bruce . Apocalypse is a third-person Action/Shooter game starring Bruce Willis as Trey Kincaid. It's a furious, action-packed game with constant special effects and explosions, full 3D controls and shooting in a post-apocalyptic setting.
The apocalypse has come! In a dark and cruel future where science and religion have become rival pillars of society, they have offered their own options for salvation. A false prophet known only as the Reverend twists stolen nanotechnology to summon the Four Horsemen of the Apocalypse, a terrifying, unrivaled force of evil threatening an unsuspecting Earth. Four Horsemen of the Apocalypse - Death, Pestilence, War and the Beast. They are waiting for the Reverend's order to destroy Mankind. You play as a renegade Trey Kincaid who is able to stop the Four Horsemen and the Reverend in the style of the Bruce and One Field Warrior movies.
Playing as the hero Bruce, you must find and destroy the Four Horsemen, armed with numerous types of weapons from a flamethrower to homing missiles. You will run, jump, crawl and of course shoot a lot in a neo-gothic world that is on the verge of destruction. You have to make your way through 12 levels, including sewers, prisons, military factories, rooftops, cemeteries and other dark, deadly places of the future. There are many enemies in the game (who do not shine with intelligence, but they take in quantity), cancel weapons and powerful Bosses, which are enough for a dozen Apocalypse.
So let's get into the game. Each level is different from the others and filled to the brim with action. The levels are fairly straightforward, but that's just a plus for this game, and comes with ample amount of stuff to blow up and destroy. The player controlling Bruce's hero can make him run, jump, spin, change weapons and shoot. Analog control is too sensitive in some places, so at times it's better to switch to the number keys. The virtual camera moves and follows the hero in most of the game quite successfully. Shooting is controlled by buttons: Triangle - shot up, Circle - right, Square - left and X - down. This is a rather unorthodox method, used in only a few games so far and feels rather strange at first. But soon you will realize that this is a very convenient control for this style of play, and you will begin to blow enemies to shreds easily and naturally. Other than the machine gun, all other weapons have a finite amount of ammo, so use them wisely. But don't worry too much about it, as all sorts of devastating weapons are scattered in abundance throughout the levels. In addition, Bruce has a special weapon that destroys entire areas when used ... cool!
‹
›
Home
View web version