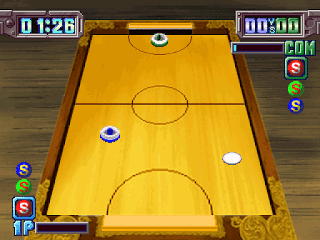 Genre: Sports
Perspective: 1st-person
Art: Anime / manga
Gameplay: Arcade
Sport: Hockey
Published by: Mud Duck Productions
Developed by: Success Corp.
Released: 2003
Platform: PlayStation (PSX, PS1)
Not all low-budget games (which include Air Hockey) are capable of disappointing the player, especially if he already has an idea of what he is buying (or downloading). Here you have air hockey, or table hockey. Air Hockey is pretty simple, there are four characters and there are tables to play, you can either play against the computer or against a friend - the goal is to score more goals than your opponent before the timer runs out. Unlike regular air hockey, various bonuses periodically appear on your table (as in arcade games). Like other casual games, Air Hockey can be played when you don't feel like playing other games and have some time to kill. True to air hockey on the PlayStation, you can find games with better graphics or richer gameplay, such as Klaymen Gun Hockey, where the heroes are characters from the unforgettable Neverhood.
‹
›
Home
View web version