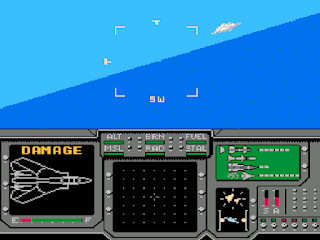 Genre: Action, Simulation
Perspective: 1st-person, Top-down
Visual: Isometric
Vehicular: Flight / aviation, Vehicular combat
Published by: Activision
Developed by: Activision
Released: 1992
Platform: Nintendo (NES)
In "Ultimate Air Combat" (known in Japan as "Aces: Iron Eagle III"), we will take on the role of the world's best pilot, who is tasked with completing 36 missions and eliminating the evil dictator General Don Gwano (Don Gwano).
The choice in the "Ultimate Air Combat" we will be offered several fighters: F14 Tomcat, F18 Hornet and Harrier II. From weapons there are several types of missiles, bombs, harpoon and more. Each mission is divided into two parts: in the first, we control the aircraft from the cockpit, and in the second, we destroy enemy forces in an isometric view.
The game turned out to be quite colorful and very interesting, mainly due to the introduction of two types of piloting. According to the totality of the estimated parameters (graphics, sound, etc.), the game "Ultimate Air Combat" is one of the best simulators for the NES.
‹
›
Home
View web version