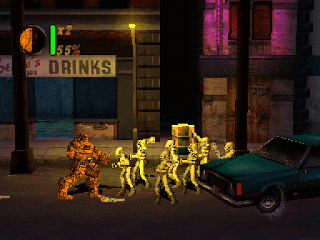 Genre: Action
Perspective: Side view
Gameplay: Beat 'em up / brawler
Published by: Acclaim Entertainment
Developed by: Probe Entertainment Ltd.
Released: 1997
Platform: PlayStation (PSX, PS1)
Here we meet the comic book heroes of the heroic Fantastic Four - Mister Fantastic, Invisible Woman, The Human Torch and The Thing, plus bonus character The Hulk. The characters of the game are made in polygonal graphics, while the action takes place in a 2-dimensional projection. Moving from screen to screen on five scrolling levels, they fight with minions of Dr. Doom, as usual dreaming of universal domination. Everything is used - barrels, cars, various objects and of course fists, for this case there are four options for strikes, one of which is special, it can only be performed by gaining enough energy. The main feature of the game is that you can switch between characters during the game, using their superpowers, this is necessary to complete the game. With Multi-Tap, it is possible to play the game in 4-player mode. In general, the game is not very successful, and if the graphics are pretty enough (although the animation is pretty bad), then the game content can get boring very quickly.
The Fantastic Four were Marvel Comics' first comic book superhero team. Created by Stan Lee and Jack Kirby, they first appeared in The Fantastic Four #1, released in 1961. The Fantastic Four comics are among the most popular of all Marvel publications, along with Spider-Man and the X-Men. Here are our heroes:
‹
›
Home
View web version