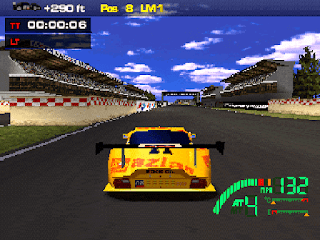 Genre: Racing / driving
Perspective: 1st-person, Behind view
Gameplay: Managerial / business simulation
Vehicular: Automobile, Track racing, Vehicle simulator
Published by: Infogrames Europe SA
Developed by: Eutechnyx Limited
Released: 2000
Platform: PlayStation (PSX, PS1)
The best pilots in the world are going to this famous race, where the most serious test lies ahead. In this 24-hour circuit race, not only outstanding skill must be demonstrated, but also courage and endurance. Winners in such races always become a true legend. The first race was held in 1923, and for nearly 85 years, car manufacturers and drivers have dreamed of winning this legendary track, and interest in it does not fall. Numerous teams, curious rules and a friendly atmosphere on the track make this race almost the queen of all racing competitions. Automobile Club De I'Quest diligently preserves the traditions, sports spirit and friendly attitude between the teams during all these years.
Three types of cars participate in this race: GT2, GT1 and the so-called prototypes (Prototype). The most famous class is GT2. Cars of this class are designed on the basis of sports models that are developed by various manufacturers. GT1 class cars are designed with racing in mind, based on conventional road cars. The Prototype class is specifically designed for circuit racing and is close in performance to the GT1 class. The easiest way to start the game is with a GT2 car. Although their characteristics are somewhat lower than those of other classes. Nevertheless, their racing capabilities and handling quality allow even beginners to show decent results. As you gain more experience in driving a car in this class, you can move on to the Prototypes, and then to the GT1 class. Then you will have a higher chance of taking the winner's place on the podium.

To enter the following codes, simply enter the Enter Name option on the Options Menu.

Enter FIRSTON as your name and watch the screen shake. Now when you start a race in any game mode, no matter what position you take at the finish line, you will always be the winner. Of course, this does not mean that you will be declared the winner of the race. Just when you go to the "Try Again" screen, you will receive a prize for winning and an additional car. When you get tired of easy prey, enter the FIRSTOFF code instead of your name and return to the normal game mode again.

All cars and tracks

Enter TATOO as your name to access all cars and tracks in Quick Race mode.

To qualify for the GT2 Reverse Cups, win the GT2 Prototype Tournament as well as the GT1 Cup at the Amateur level and qualify for that Pro level in Challenge or Time Attack mode. Otherwise, you can enter the same competitions if you win the GT2 Cup at the professional level.

To enter the Prototyre Reverse Cup tournament, you need to win the Prototyre Cup at the professional level, which will open the Challenge or Time Attack modes.

In order to get additional cars in Quick Race mode, you must achieve some success in arcade mode. Other cars may be available to you if you can adequately perform in the Championship mode. If you are unable to do this, then use the appropriate tips.

In order to access additional tracks in Quick Race mode, including alternate versions of them, you just need to get to them in arcade mode or championship mode. True, the last three tracks can only be discovered in the final phase of the game.
‹
›
Home
View web version