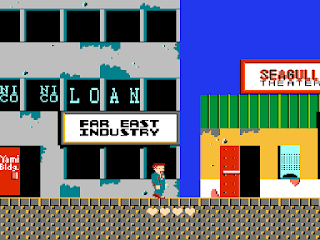 Genre: Action
Perspective: Side view
Visual: 2D scrolling
Gameplay: Beat 'em up
Published by: Taito Corporation
Developed by: Taito Corporation
Released: 1986
Platform: Nintendo (NES)
The game was developed under the direction of Japanese comedian Takeshi Kitano. To be honest, he didn’t really know how to lead, but he was the first guest star of this kind. Because I wanted a lot of things, and the possibilities of the Famicom set-top box were limited. At first it was assumed that the game would be based on the TV show Takeshi's Castle, but then the comedian changed everything and generally wanted something that would result in Grand Thief Auto in the future. However, too much violence could not be allowed in the game - the audience would not accept, and there would be age restrictions.
The plot of the game - an office worker is trying to find a treasure on the island.
‹
›
Home
View web version