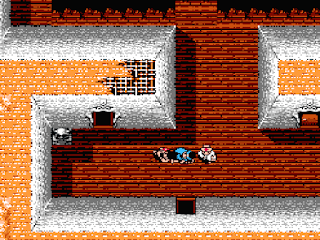 Genre: Role-Playing (RPG)
Perspective: 1st-person, Top-down
Pacing: Turn-based
Gameplay: Puzzle elements
Narrative: Detective / mystery, Horror
Published by: Capcom Co.
Developed by: Capcom Co.
Released: 1989
Platform: Nintendo (NES)
An intriguing and interesting game. Once upon a time there was a great and lonely artist Mamiya Ichirou in a remote mansion. Then he died. But there are rumors that the mansion contains valuable paintings that would be worth having. In order to capture (in the photo!) at least live pictures, a group of adventurers consisting of five people (Kazuo, Akiko, Taro, Asuka and Emi) goes there. True, at the entrance to the mansion they are met by the ghost of the artist and threatened. And then, as if on a knurled track, they fall into a trap and now the main goal is to get out of the sinister house.
What can I say, one word - Capcom - already means that we are faced with a great game. You will wander through the rooms of the mansion in search of various things and mysteries. Different characters have different abilities, for example, Taro can take pictures, Emi can open a closed door, etc. Enemies attack suddenly and randomly.
The game has never been released outside of Japan, which is a shame. But you don’t have to be too upset, as there is a translation into English.
Interestingly, the game was based on the horror movie of the same name (or rather, the game and the movie came out at the same time, according to the same script). The famous Resident Evil series was originally intended as a continuation of the Sweet Home game, but in the end they decided to give the green light to a new horror movie, which they did not fail.
‹
›
Home
View web version