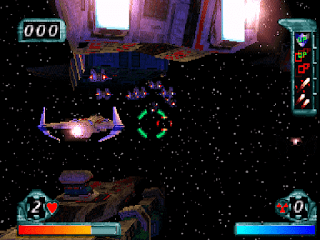 Genre: Action
Perspective: Behind view
Gameplay: Shooter
Vehicular: Space flight
Setting: Sci-fi / futuristic
Published by: Sony Computer Entertainment Europe Ltd.
Developed by: Rage Games Ltd.
Released: 2001
Platform: PlayStation (PSX, PS1)
The name Rage Software is known to most gamers thanks to games such as Expendable and Incoming, which attracted attention with an abundance of various visual effects. Before that, however, the guys from Rage also showed themselves, at least with such a once popular game as Striker, or Darklight Conflict. Recently, Rage Software has become extremely interested in the life of Sony's consoles, which eventually led them to enter into an agreement with SCEE to publish Space Debris, developed exclusively for the PlayStation. The strongest part of this game, of course, can be considered a graphics engine, designed primarily to amaze all gamers with amazing graphics quality and special effects, which, in general, is quite traditional for Rage Software. Recall at least the same PC version, in which the graphic performance overshadowed everything else! In Space Debris, the engine is a special pride of programmers, because it is able to display more than three thousand polygons on the screen and not even slow down. Not to mention all sorts of pleasant little things, like beautiful explosions, laser flashes and other graphic tinsel that the player has always liked and will like.
The genre for Space Debris was also chosen as the most traditional for a developer like Rage Software, that is, a standard three-dimensional space shooter, in which its creators will find it easiest to demonstrate all the delights of their new engine without worrying about anything else. However, we must be fair, it seems that the people working on this project are also trying to introduce a more or less decent storyline into their game, diversify the gameplay as much as possible and demonstrate lively, beautiful, laid-back and interesting shooting action. By the way, a couple of extra words should also be said about the plot. It all starts with the fact that a terrible and terrible army of aliens from a distant and deep space invades the solar system and starts to wet everyone. After conferring, the big bosses of our planet decided to quickly mobilize the United Earth Defenses, which could withstand the invasion of aggressive green men. But everything was abruptly covered with a copper basin, as our valiant space fleet in the battle with the enemy received a strong crack on the nose and was forced to hastily retreat from the battlefield. The protagonist of the game, a brave UED fighter pilot named James Bryant, ended up behind enemy lines, where he is looking for Dr. Raymond'a Eand'a, who lives on an asteroid. After saving the scientist from unfriendly creatures called mechanoids, he begins to help the brave pilot with all his might. The plot of the game is constantly evolving, involving you in the game, and all its vicissitudes are shown in colorful video inserts between levels.
What is really inspiring is that the external (and internal) differences of all locations in which battles with alien invaders unfold. Everything will be different so that fans of shooters do not leave screens and TVs for as long as possible and get the maximum pleasure from shooting in different directions. Thanks for taking care of me. Honestly. And throughout the game, we will have time to feel in our hands as many as six almost completely different space destroyer ships, all with completely different weapons. It's good. There should be a lot of weapons, and most importantly, different weapons. So much more fun. Space Debris will not disappoint fans of space shooters.
‹
›
Home
View web version