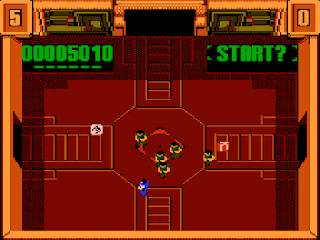 Genre: Action
Perspective: Top-down
Visual: Fixed / flip-screen
Gameplay: Arcade, Shooter
Setting: Sci-fi / futuristic
Published by: Acclaim Entertainment
Developed by: Williams Electronics Games
Released: 1991
Platforms: Nintendo (NES), Super Nintendo (SNES), SEGA Genesis / Mega Drive
Our hero enters a room with four doors. From these same doors, like cockroaches, enemies begin to fall, who, at the first opportunity, try to hit you with a baton. But you just don’t give up and start shooting back at them, collecting money and weapons along the way. When all opponents are destroyed, we go to another room and start over.
‹
›
Home
View web version