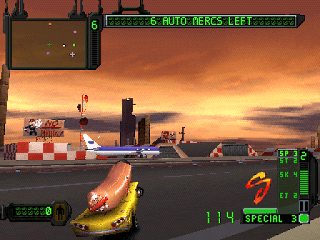 Genre: Action, Racing / driving
Perspective: 3rd-person
Setting: Post-apocalyptic, Sci-fi / futuristic
Published by: GT Interactive Software Corp.
Developed by: SingleTrac Entertainment Technologies
Released: 1998
Platform: PlayStation (PSX, PS1)
Rogue Trip: Vacation 2012 was developed using the engine of the first two Twisted Metal games. The game was released in 1998 only for the Sony PlayStation. The game belongs to the genre Vehicular combat. Everything in the game is done in the tradition of the genre. Destructible objects, a lot of various weapons and, of course, continuous battle with rivals. As before, your main task is to destroy all opponents on the map. But there are some innovations. You act as a taxi driver. You need to find the passenger and show him around. For this, you will be credited with money for which you can purchase weapons and replenish your health. Unlike Twisted Metal, bright, colorful levels prevail here. The game has a wide variety of different vehicles, including a two-wheeled motorcycle. As you progress through the game, new characters (heroes) and locations will open. The game also has a multi-player co-op mode similar to Vigilante 8: 2nd Offense. It is possible to connect consoles using the PlayStation Link Cable and thus increase the number of players up to 4 people.
The game has a lot of humor, the most diverse superweapon, which sometimes will cause only positive emotions and great music.
‹
›
Home
View web version