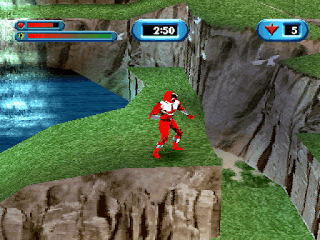 Genre: Action
Perspective: 3rd-person
Gameplay: Beat 'em up / brawler
Setting: Sci-fi / futuristic
Narrative: Martial arts
Published by: THQ Inc.
Developed by: Climax Group
Released: 2001
Platform: PlayStation (PSX, PS1)
The second Power Rangers game. Repeats the ideas of the first part. It is possible to play in the form of a robot and together with a friend.

By 3000, almost all crime had been eliminated. One of the leaders of the underworld, Ransik, was arrested, but he was able to escape and travel to the past to change the course of history. He was followed by four officers from the Time Force, an organization dedicated to solving crimes in time. When Team Leader Alex is injured, the team finds Alex's ancestor Wesley, who becomes the new Red Time Force Ranger.
‹
›
Home
View web version