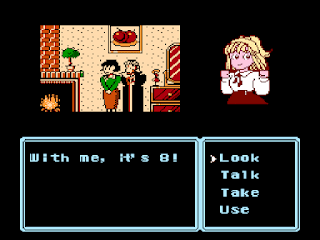 Genre: Adventure
Perspective: 1st-person
Art: Anime / manga
Published by: Towa Chiki
Developed by: Natsume Co.
Released: 1989
Platform: Nintendo (NES)
Take control of Erika, a musical idol out to foil an evil plot. Guide her through five acts and help her save her musical career.
Idol Hakkenden is a Japanese-style adventure game where you guide Erika through the beginning of her career to the fulfillment of her dream. As you progress through the game, you determine what Erika should do next by selecting from a menu. You'll also communicate with some of Erika's friends (and not-so friends) as they give you hints about how Erika should proceed.
Naturally, music plays an important role. The six songs that appear in the game are of the J-pop variety, with lyrics at the bottom of the screen in lieu of sung lyrics.
‹
›
Home
View web version