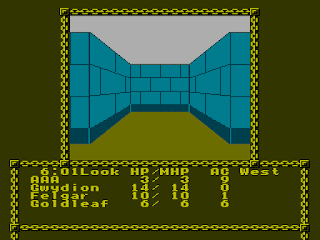 Genre: Role-Playing (RPG)
Perspective: 1st-person
Pacing: Turn-based
Setting: Fantasy
Published by: FCI
Developed by: Strategic Simulations
Released: 1992
Platform: Nintendo (NES)
"Advanced Dungeons & Dragons" is a whole universe that emerged from the original tabletop role-playing world "Dungeons & Dragons", which in turn is largely based on the writings of Professor Tolkien. Three sets of rules (described in the author's books), most of the fantasy games based on them, cult and religion - that's what "Dungeons & Dragons" is.
"Pool of Radiance" is a fairly standard role-playing game, but there is one nuance that distinguishes it from many games of that time - pseudo three-dimensionality (with a view of the action from the eyes of the character). Graphically, the game looks very cool, yet for those times the view from the eyes of the protagonist was a curiosity. And the unique spirit of the game is reinforced by many role-playing elements and non-linear gameplay.
It should be noted that "Advanced Dungeons & Dragons: Pool of Radiance" is the only game in the series that received very positive reviews from critics both in the 1990s and in recent times. This is the one you need to run in the first place if you want to spend time playing a very high-quality NES RPG.
‹
›
Home
View web version