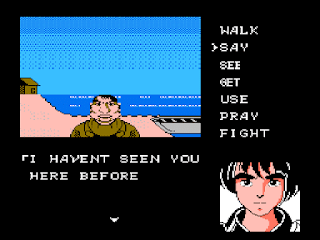 Genre: Adventure
Perspective: 1st-person
Art: Anime / manga
Setting: Fantasy, Sci-fi / futuristic
Published by: Pony Canyon
Developed by: Graphic Research Co.
Released: 1988
Platform: Nintendo (NES)
Kujaku Ou is originally a creation of Makoto Ogino, launched in 1985 and spawned two other series, the last of which is still published today. Based on the manga, two feature films were made. What is interesting, as in the case of the film adaptation of City Hunter, was filmed not by the Japanese, but by the Chinese. And of course, not without anime. The two small OVA series cover different events and differ in quality of performance, but both are solid examples of mystical anime old school. And largely thanks to the information embedded in them, the synopsis below was written.
The central figure in Kujaku Ou is the adolescent Kujaku, a monk, Buddhist and exorcist. The first thing that comes to mind when exorcism is mentioned is stern people in cassocks, crying out for God's grace, so that from inadequate people who turn their heads 180 degrees, run around the ceiling and swear endlessly, make people adequate, balanced and respecting Newtonian laws gravity. So, you can forget about all this. Since Kujaku does not seek meetings with the obsessed, but immediately sees the root and fights the root cause of all obsessions, that is, it inexorably rushes at the demons, like a tank. In his case, holy water and a kiss on the cross are not an argument, but to beat any wickedness in the face is bad manners. He works according to a different method: as he sees a monster, he begins to recite a memorized mantra, endlessly writing out pretzels with his hands, which not every shadow theater actor is capable of. If the monster is more or less smart, then it immediately gets scared and runs away. Well, the one that is dumber will be punished for his stupidity in full with hellish shouryuken. The ability to resist demons and confidence in the future of the hero is ensured by the fact that he himself is the reincarnation of some higher powers that are just waiting to wake up ... And he also has a sister with similar talents, whose existence leads to the end of the world, and a girlfriend childhood, languishing over a young Buddhist.
‹
›
Home
View web version