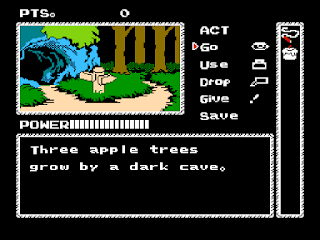 Genre: Adventure
Perspective: 1st-person, Top-down
Published by: Victor Musical Industries
Developed by: Micronics
Released: 1988
Platform: Nintendo (NES)
Moon Princess is a logical picture game (moving through the screens), which has a multi-genre structure, as well as excellent animation of what is happening on the screen.
An angel turned to the brave hero with the task of finding the Moon Princess in an enchanted bamboo grove. Before leaving, he left the character a whip and a candle, the first two items that the player will need in the future.
As is typical for similar games on the NES, the player chooses from a variety of commands indicated on the right side of the screen to achieve any results: Go (four types of direction), Apply (select items from the inventory), Remove (throw an item from the inventory) , Give (transfer item to NPC), Save (save game progress). As well as continued commands depicted by icons: Look (get acquainted with things, help to search for objects), Take (pick up a thing and put it in inventory), Speak (ask the inhabitants of the world about various finds and gossip), Interact (Kiss, Bravado, Hit) . Some interactions, such as kissing a fisherman, can cause him to leave quickly, as well as throwing away an item that you need to pass later.
The game also takes place in other genres and modes: Bamboo cutting - you need to randomly cut through the bamboo stems, several times, and the map constantly changes the correct position of the path (if you choose the wrong direction, the game takes away your vitality points). Combat is the use of weapons or fists to defeat opponents who, like you, have health and punching power. The boat is similar to the Bamboo Cutting, only now you need to find the right direction in the maze of reefs.
To say that the game is interesting is practically not to describe its main advantages, which are in each performance of this masterpiece.
‹
›
Home
View web version