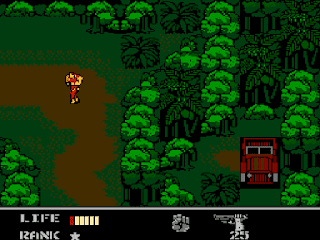 Genre: Action
Perspective: Bird's-eye view, Side view
Visual: Fixed / flip-screen
Interface: Direct control
Narrative: Spy / espionage
Published by: Ultra Software Corporation
Developed by: Konami Industry Co.
Released: 1990
Platform: Nintendo (NES)
The year is 2001, exactly three years have passed since the events of the original Metal Gear. The FOXHOUND special forces group discovers that a hostile state in the Middle East (heh, where else?) may have gotten their hands on the Metal Gear blueprints, and worse, may have built several models. Lieutenant Solid Snake, along with two comrades (John Turner and Nick Myer) - experts in their field. The operation under the code number 747 has begun! But the backstory doesn't end there. John Turner, as a bait, specifically surrenders as a prisoner, and thanks to him, Solid Snake blows up a ship with a weapon for Metal Gear tanks. Then, going deeper into the base, he connects to Nick and learn that in addition to developing Metal Gear II, the enemy command is planning to drop nuclear bombs around the world. I had to hurry, but during the shootout Nick was mortally wounded. The spy who supplied Solid Snake with information is exposed and our lieutenant is left alone with himself. But the hero does not give up, brings the matter to the end ...
The game was created as a sequel to the original Metal Gear and only for North America and Europe. However, the creator of the franchise, Hideo Kojima, did not know about Snake's Revenge and created his own sequel for MSX computers. In the end, Snake's Revenge is just an offshoot of the series' storyline, not a sequel.
Just like in the first part, here it is necessary to conduct a covert fight against enemies, to obtain weapons, equipment and information. The levels are quite varied, full of various traps (such as searchlights, suicide bombers, etc.). Also, you now need to interrogate captured officers by injecting them with truth serum.
The game turned out to be mediocre, but quite interesting. Let's play!
‹
›
Home
View web version