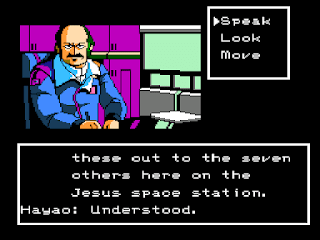 Genre: Adventure
Perspective: 1st-person
Art: Anime / manga
Setting: Sci-fi / futuristic
Published by: King Record Co.
Developed by: Chunsoft Co.
Released: 1989
Platform: Nintendo (NES)
This adventure will lead the story of the space station J.E.S.U.S. And this is not the only allusion to the Christian religion - there are enough references like this in the game (for example, the ship has the shape of a double-edged sword, referring us to the Book of Revelations). The plot revolves around the fight against aliens from Halley's comet.
The plot is somewhat reminiscent of "Alien", and other similar horror movies: a closed space, space around, and something evil and deadly roams the ship.
The gameplay, as in any classic adventure game, comes down to solving a set of puzzles: choosing the right option, talking to the right person for promotion, using the item correctly - in general, no special frills.
In the center, of course, the story told by the guys from Chunsoft is very, very entertaining.
‹
›
Home
View web version