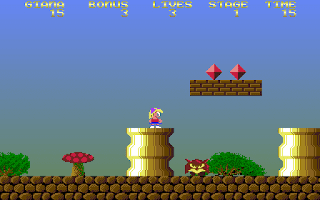 Genre: Action
Perspective: Side view
Visual: 2D scrolling
Gameplay: Arcade, Platform
Setting: Fantasy
Published by: Rainbow Arts Software GmbH
Developed by: Time Warp Productions
Released: 1987
Platform: DOS
At one time, The Great Giana Sisters made quite a splash. And it's not about some amazing game qualities, but about violating every conceivable copyright - in fact, the levels and graphics design were shamelessly borrowed from Super Mario Bros. The case was settled without trial, the game was quickly removed from the shelves - but not forgotten. After all, the owners of personal computers also needed their brothers Mario. They are two creepy girls - Giana and Maria, who run and jump through the levels, collect crystals instead of coins and kill owls instead of turtles. It is clear that success was ensured: even despite the virtual absence of the game on the shelves, it quickly became a classic.
Of course, it should be noted right away that the game was made very high quality: the programmer and author of the game, Armin Gessert, unmistakably transferred the mechanics of Super Mario Bros. on the Commodore, Manfred Trenz - the future author of Turrican - drew the funny main characters and the rest of the graphics, and Chris Helsbeck wrote the very music, which, without discounts, can be called one of the milestones of the SID structure.
As mentioned above, the levels of the game are quite similar to Mario: dungeons and ground levels alternate, once every 4 levels a spider awaits at the end, which is very easy to jump over, and once every 12 - a dragon, which is already more difficult. That, in general, is all that can be said about the levels: they are rather unpretentious (although not too boring - various new enemies appear, the complexity increases).
Of course, now the game looks rather banal, but I still give a high rating for the cult and immortal music, which is still used in various arrangements by the followers of Armin Gessert, releasing sequels to games about sisters.
‹
›
Home
View web version