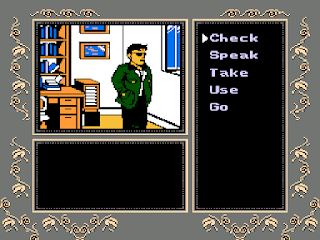 Genre: Adventure
Perspective: 1st-person
Art: Anime / manga
Narrative: Horror
Published by: Hudson Soft Company
Developed by: Hudson Soft Company
Released: 1989
Platform: Nintendo (NES)
Seirei Gari is a horror adventure game similar to the more famous Uninvited or Deja Vu. Each action is performed by selecting a command from the menu. You must explore each location before objects become "visible" and can be interacted with. Sometimes there will be comrades next to you who will help you in your search.

Boy Michimune and girl Miu live happily in a small house together with their wise old grandfather. One day, just as they were about to celebrate Miu's birthday, the room suddenly became dark and an evil demonic figure appeared out of nowhere. Ironically, the dark being spoke to your grandfather, saying that a lot of time had passed. Apparently, grandfather also knew who or what this figure was, since he called him by the name Rosenkreuz. Rosenkreuz explains that he has waited a hundred years, but now it is possible to bring back the God of Evil and rule the world! But for some unknown reason, he needs Miu. Rosenkreuz beats your grandfather and kidnaps Miu! Before his death, grandfather could only whisper: "Save ... Miu ...". And so Michimune embarks on a dangerous journey to the land of evil in order to save Miu from the clutches of the Rosenkreuz.
‹
›
Home
View web version