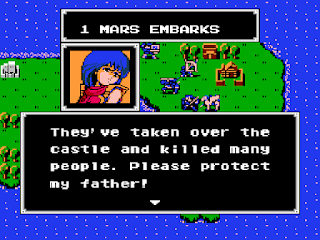 Genre: Role-Playing (RPG), Strategy / tactics
Perspective: Top-down
Art: Anime / manga
Pacing: Turn-based
Setting: Fantasy
Published by: Nintendo Co.
Developed by: Intelligent Systems Co., Ltd., Nintendo R&D1
Released: 1990
Platform: Nintendo (NES)
Fire Emblem: Shadow Dragon & the Blade of Lighti is the first game in the Fire Emblem universe, released for the Famicom on April 20, 1990. In October 2009, a slightly modified version of it was made available for Japanese Wii owners to download via the Virtual Console service.
So, the action in the first part of the game takes place on a fictional continent called Akaneia, and the main character is called Marth - a character who will appear much later in "Super Smash Bros. Melee" (Nintendo GameCube, 2001). And the falchion weapon available in the first part will later act as a franchise of the "Fire Emblem" series in the game "Super Smash Bros." (Nintendo 64, 1999; Wii Virtual Console, 2009).
March is the prince of the lands of Altea and a direct descendant of Anri - a warrior who once, a long time ago, killed the dark dragon Medeus. However, now, after being attacked by the neighboring kingdom of Dolhr, Marth is forced to become an exile who has taken refuge in the nation of Talis. His sister Ellis was taken hostage after the protagonist's father was killed in battle by the evil priest Gharnef. With the help of the Altean knight Jeigan, the Talysian princess Shiida, and other assistants, March sets off in search of the sacred sword "Falchion", as well as the "Fire Emblem" (which will allow him to master the eminent melee weapon). Only after the protagonist finds the sword will he be able to confront Garnef and Medeus, return the kingdom of Altea to a peaceful existence, and also save his sister.
Fire Emblem was one of the first turn-based strategy games on home consoles. However, unlike other strategy games, it borrows certain role-playing elements (like "Dragon Quest" for example), so it can safely be called the first game in the tactical RPG genre. Later in the games in the series, numerous changes were made to the gameplay, below is a list of the distinguishing features of the very first part of "Fire Emblem":
The game received very good reviews not only from critics, but also from ordinary Japanese users (and later from English-speaking fans of tactical role-playing games). After all, "Fire Emblem: Ankoku Ryu to Hikari no Tsurugi" became a pioneer, the first tactical RPG in the history of the gaming industry, well ahead of its time! Many thanks for this to the amateur translation group "Quirino". Don't miss the unique and very first game in the now popular tactical RPG genre, be sure to play it!
‹
›
Home
View web version