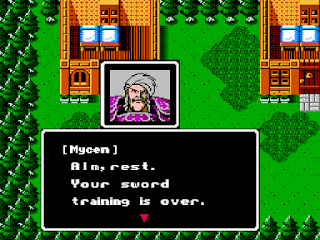 Genre: Role-Playing (RPG), Strategy / tactics
Perspective: Top-down
Art: Anime / manga
Pacing: Turn-based
Setting: Fantasy
Published by: Nintendo Co.
Developed by: Intelligent Systems Co.
Released: 1992
Platform: Nintendo (NES)
Fire Emblem Gaiden is the second game in the series, published by Nintendo on March 14, 1992 in Japan exclusively for the Famicom console. The game describes a slightly side plot relative to the main storyline in the original. Although Fire Emblem Gaiden is set in the same game world, it takes place on a different continent and therefore has no obvious connection to the original game's story. However, as we progress through several characters from the original game, we will still meet here.
The second part of the game for five chapters tells about two heroes, friends Alm and Celica, who travel through the territories of the two kingdoms Rigel and Sofia on the continent of Barensia. The world map is initially closed, but as you progress through the game, more and more vast territories become available. Over the course of the game, it will be revealed that Alm is actually the prince of Rigel, while Celica is the princess of Sophia. "Fire Emblem Gaiden" was the first game in the series where the protagonist has a promotion option: Alm starts out as a Fighter before eventually becoming a Hero, and Celica starts out as a Priestess and then progresses to Princess.
Although the combat system and main gameplay features of "Fire Emblem Gaiden" are taken from the original game, it also introduces some new or modified gameplay features:
Despite numerous changes made to this and subsequent games in the series, most of the later games returned to the gameplay of the original first part. And some of the innovations (such as, for example, a navigable world map and class branching) were subsequently used in "Fire Emblem: The Sacred Stones", for which the game rightly received very good reviews from critics.
The game turned out to be more faded compared to the original. Although the graphics and sound in the second part are not worse, but the story in it is very detached from the first part, and in fact many people bought the second game with the hope of continuing the adventures with the characters they already know. However, the main disadvantages of the game are as follows: there is only one single level of difficulty and a very small variety of enemies. Playing "Fire Emblem Gaiden" for the second time will be very boring and not interesting even for the most notorious fans and admirers of this series, and this is a very sad fact.
‹
›
Home
View web version