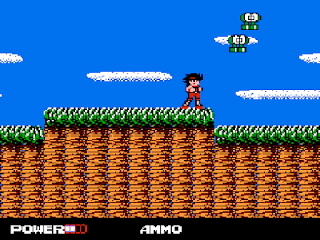 Genre: Action
Perspective: Side view
Visual: 2D scrolling
Gameplay: Metroidvania
Published by: Vic Tokai
Developed by: Vic Tokai Corporation
Released: 1990
Platform: Nintendo (NES)
The protagonist of the game is Billy "Big Bang" Blitz, who is a sergeant in Assault Brigade for Real Emergencies (S.A.B.R.E). He abruptly cut short his beach vacation with his girlfriend Mary to save Professor Plum, who had mistakenly created a bomb powerful enough to destroy the entire Earth. The protagonist soon encounters Tom Guycot, the master kidnapper, and learns that the horrific bomb is being controlled by seven medallions that have been distributed among the governors of the city of Demonhead.
Further, the protagonist meets a hermit on his way, who teaches him to use the power that will help protect him in dangerous situations.
The gameplay in the game does not differ in any innovations, but it is quite exciting. The hero can jump and shoot - this is quite enough to defeat the crowds of monsters opposing you. Monsters in the game have several types of appearances. The first is cartoonish, meaning the enemies are more suited to cartoons than games. The second type is mixed, when unpleasant parts of the body and comical faces are intertwined in one character. The third type - those that can be found already closer to the middle of the game and beyond, here we are dealing with real monsters who are ready to kill the character at any second.
The game provides for the movement of a relatively large world, divided into 42 territories. Territories can be separated by water and lava tunnels, one-way descents, forests, mountains, and high-tech bases that fire tons of homing missiles. To facilitate movement, there are provided: a rocket pack, diving and fireproof suits. The plot is promoted by rare NPCs and letters spontaneously falling from above with content like “your girlfriend is with us, give up!”. Role-playing elements come down to inventory, money, a store and an old goat ... that is, an elder, a one-time increase in the maximum hit points of the protagonist. After the death of the hero, you don’t need to load the save (all the more, instead of them there are paid passwords; in the case of the Japanese version, hieroglyphic ones) - you will automatically wake up at the fork in front of the place of death with a slightly smaller amount in your pocket.
It is worth noting that the game has the ability to return to the beginning of the level, and this is a very rare opportunity for games of that time.
In general, the game looks good: nice graphics and animation, good music and sound design, a clear and understandable plot, frequent animated screensavers and explanation in the form of dialogues.
‹
›
Home
View web version