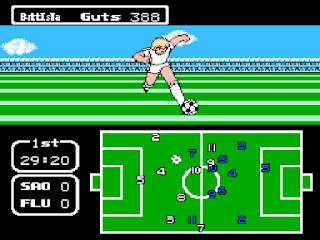 Genre: Sports
Perspective: 3rd-person
Interface: Menu structures
Gameplay: RPG elements
Interface: Menu structures
Sport: Football (European) / Soccer
Published by: Tecmo
Developed by: Tecmo
Released: 1990
Platform: Nintendo (NES)
"Captain Tsubasa Volume II: Super Striker" is the continuation of the famous series of games that began to appear on the Famicom, later called "Cinematic Soccer". The game was released by "Tecmo" exclusively for the Japanese market in 1992. The second part is very similar to its predecessor "Captain Tsubasa", however it has some minor graphical improvements. It was also the last installment to appear on the NES, with the next game in the series coming to the SNES two years later.
In "Captain Tsubasa II: Super Striker", the story begins after three years have passed and Tsubasa is now in Brazil with the São Paulo youth team. He trains under Roberto Hongo, who first discovered our hero's talent when he was very young. This time we have to take control of Tsubasa's new team and win the Rio Cup with them, and our main rival will be the Flamengo team. But, in fact, this is just the beginning of the story, and all the interesting (and more difficult) matches are ahead of us, after winning the local championship.
In this game (as well as in the next three), the developers at Tecmo present a story that was not revealed in the anime, which makes their project a much more valuable project than other typical anime games. Naturally, some new, very interesting characters appear. For a game that isn't even considered an RPG by most players (the game appears everywhere in the "Sports" section), there is a very interesting story, and at times it can even surprise us, which most other games in the NES era cannot boast. For the plot and story, the game deserves 4.5 points out of 5 possible.
What can you say about the graphics? This game is one of the best graphics on the NES. The players are drawn very nicely, their movements are quite real, and as the game progresses we can see cool photos of faces whenever the player uses special moves, as well as cool quotes being said. When two players meet one-on-one, you can see dialogue between them and some nice cool anime-style photos (even if you don't understand Japanese, it's pretty easy to imagine what they're talking about). The conversations and other cutscenes of the storyline between matches are shown very well, and there are some amazing scenes that will take place in various parts of the game that look much better than originally intended (better than some scenes in most 16-bit games). There is a lot of movement in the game, despite this, the game is based on strategy, not action. Everything is drawn very beautifully: from the facial expression of the protagonist to the grass on the field and the stands, which look as great as they can be on an 8-bit system. Even the shading on the players uniform looks very good. And you should have seen the grimaces the commentator makes when interesting events take place on the field ... In general, the graphics simply exceed the capabilities of the NES and deserve a rating of 5 points.
I like the music in the game. There are 40 different tracks in "Captain Tsubasa II: Super Striker" (can any other NES game match it?). And although they are usually cyclical and repeat after about 15 seconds (in particular, command topics), they will not let you get bored. The teams we manage, and many of the opposing teams, have their own unique themes - and that really adds to the feel of the game. During cutscenes I play some melodies, usually repetitive, but there are also some unique compositions that can be heard only once, usually during some dramatic events. The sound effects are also very cool, you can hear different sounds of a flying ball depending on the type of shot that was used. High-quality sounds add a lot of emotions to the game. For example, running, jumping, or stroking sound exactly like they should sound in real life (including sliding on grass, and so on). As is the graphics. the musical component of the game deserves 5 points.
If you like anime and/or football, especially if you are into Kapinan Tsubasu anime, this game will be very interesting for you. "Captain Tsubasa II: Super Striker" is as close to perfect as you can imagine. For the NES console, in fact, there are only literally a few more of the same quality products that I really want to give the maximum final 5 points. Even if you are not a fan of sports simulators, RPGs and just sports in general, you should still try one of the games of the famous Captain Tsubasa series, you will not regret it!
The original Captain Tsubasa game spawned several sequels released at different times on different platforms:
‹
›
Home
View web version