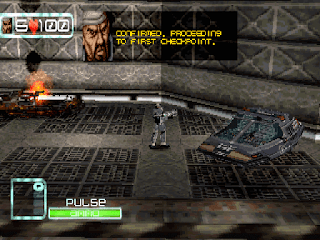 Genre: Action
Perspective: Side view, Top-down
Visual: 2D scrolling
Gameplay: Platform
Setting: Sci-fi / futuristic
Published by: Midway Home Entertainment
Developed by: Candle Light Studios Ltd.
Released: 1998
Platform: PlayStation (PSX, PS1)
Assault: Retribution is a beautiful, but not the most successful game in the shoot'em up genre. If you played the games Apocalypse, One or Millennium Soldier: Expendable - then Assault is just one of them and is more similar to the last of those listed, primarily because you will die often and usually painlessly, but always with a dumb question "For what?". In general, there’s nothing, just the laws of the genre and the hands of developers from Candle Light Studios who apparently didn’t plan to play the game themselves. The most important problems of the game are bad camera angles that lead to not very good controls, and this vigorous cocktail will quickly take away your desire to play. I would also like to note the straightforward and monotonous gameplay for this kind of games, but this is normal (the law of the genre), the main thing is to present it at the proper level, as in Apocalypse, for example. I will not compare with MDK, because this is a more developed game and has gone far ahead of all the games mentioned earlier here.
However, you will have to shoot at 7 large levels with a third-person perspective in a polygonal environment and various and remote outposts of Mankind. But the room for maneuver is limited, the battles will take place where determined by the scenario. At your disposal are many deadly weapons for the total destruction of the enemy - pulse rifles, destroyers, magnetic boosters, etc., and crowds of enemies.
‹
›
Home
View web version