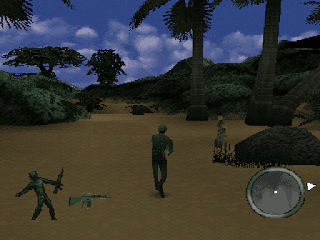 Genre: Action
Perspective: Behind view
Gameplay: Shooter
Vehicular: Tank
Narrative: War
Published by: 3DO Company
Developed by: 3DO Company
Released: 2000
Platform: PlayStation (PSX, PS1)
Army Men: World War is the first game in the World War series. Unlike previous series of games, in this one the emphasis is on completing various combat missions, similar to the tasks in the World War II. You have to destroy various transmitters, guns, etc. Ride different vehicles. Shoot back from a machine gun, get away from the chase and much more.
The plot of the game is tied to the confrontation between green and brown soldiers, led by the evil Tan. You have to guide your hero through more than 16 missions. Which, in turn, are divided into 5 different landscapes.
The game has several game modes, including for two players. Good game, I recommend it to everyone.
‹
›
Home
View web version