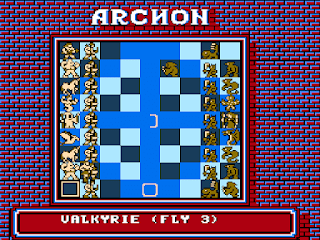 Genre: Action, Strategy / tactics
Perspective: Top-down
Pacing: Real-time, Turn-based
Published by: Activision
Developed by: Free Fall Associates
Released: 1989
Platform: Nintendo (NES)
Very unusual, fantasy-style chess, where two sides (dark and light) enter the battlefield. And the battle begins!
Pieces (or rather, units) on the board fight each other. Players make moves, and when one of the pieces attacks the other, the game goes into active mode. On the battlefield, fighters fight to the death, and, in theory, the weak can kill the strong. Only this is difficult, since the higher the class of a fighter, the greater his health reserve.
Units are divided according to their behavior on the board and are: flying and walking; and in combat mode, they are divided into shooters and those who fight in close combat.
Each of the units can move a certain number of squares, which brings the game more strategic affinity to chess.
‹
›
Home
View web version