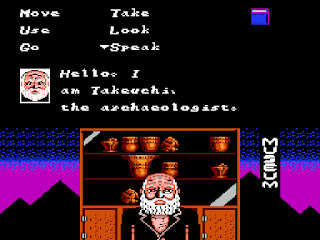 Genre: Adventure
Perspective: 1st-person
Setting: Fantasy
Published by: Tokyo Shoseki Co.
Developed by: Another Ltd., ZAP Corporation
Released: 1989
Platform: Nintendo (NES)
The game is based on the ancient Japanese legend of Yamato Takeru, the legendary hero of ancient Japan.
"Ankoku Shinwa: The Dark Myth" begins when Yamato was only thirteen years old. His father is killed under strange circumstances. The boy was looking through his father's belongings and found a letter that became the first piece of evidence in the murder investigation. From this moment we begin to play for the main character.
"Ankoku Shinwa: Yamato Takeru Densetsu" is a Japanese-style quest with a first-person perspective, one of the few in this style for the NES. Using the menu on the screen, you can select actions (watch, take, move, and others).
‹
›
Home
View web version