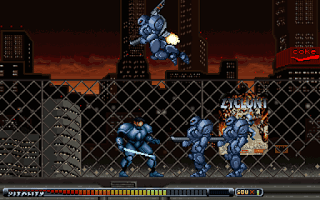 Genre: Action
Perspective: Side view
Setting: Sci-fi / futuristic
Published by: Phantagram Co.
Developed by: Phantagram Co.
Released: 1995
Platform: DOS
Extremely curious, extremely interesting and extremely dark anime-style arcade game in the post-apocalyptic world of the future. You play as a Japanese warrior who fights with the sword against the machines that have seized power.
The controls in the game are very simple - a side view, you can move forward and backward, jump, crouch and fight. The passage of the game consists of levels, each of which, in turn, is divided into "zones". After passing one of them, it is no longer possible to return to the previous one. It is possible to get from the "zone" to the "zone" only by killing everyone who blocks the path. There are bonuses, mainly for health improvement. Perhaps the most unusual thing is the presence of a "helper" in the form of a shooting ball, which can be found. He will follow you and help you in battle (but he will also be shot at, so he is not permanent). The variety of opponents is very pleasing - several types of robots, including flying ones, some jumping machines with a very advanced AI, shooting phenomenal bursts, large robots and even people serving the machines ... But the very juice is, of course, the bosses. A huge, theatrically appearing robot awaits you at the end of each level - see if it is so easy to defeat each of them ...
The graphics in the game for their time and for the genre are at a high level, the sound design is also pleasing, especially the sounds of the appearance of bosses.
The game is recommended to all fans of complex arcades, as well as anime fans.
‹
›
Home
View web version