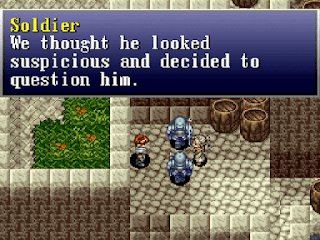 Genre: Role-Playing (RPG)
Perspective: Bird's-eye view
Visual: 2D scrolling
Gameplay: Action RPG
Setting: Fantasy
Published by: Nihon Falcom Corp.
Developed by: Nihon Falcom Corp.
Released: 1995
Platform: Super Nintendo (SNES)
An exclusive part of the Ys series exclusively for the Super Nintendo. There are two versions of this game Ys V - Ushinawareta Suna no Miyako Kefin and Ys V - Expert. This implementation tells about the new adventures of our protagonist Adol, known to many from previous games. This time the plot will revolve around the city of Kefin, which was destroyed many years ago, but you need to find it, by all means, somewhere deep in the desert and prevent a terrible catastrophe. You will have to travel through all sorts of terrains, exploring countless dungeons, visiting many cities, and doing all the usual hero routines. You will have to buy weapons and armor in the city and then go into battle. This part has many innovative innovations compared to previous Snes games, as well as improved graphics. Recommended to all fans of this series.
‹
›
Home
View web version