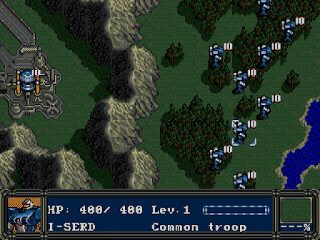 Genre: Role-Playing (RPG), Strategy / tactics
Perspective: Top-down
Art: Anime / manga
Pacing: Turn-based
Vehicular: Mecha / giant robot
Setting: Sci-fi / futuristic
Published by: Masaya
Developed by: NCS Corporation
Released: 1992
Platform: SEGA Genesis / Mega Drive
An excellent turn-based strategy game with RPG elements or, more simply, Tactical role-playing. The game is made in good style and with anime-style screensavers. You have to manage an army of robots controlled by people, about the same as in the Front Mission game. The game engine is similar to the game engine of the Langrisser II game. The game takes place in 2384, the earth takes part in an interstellar war, and comes out victorious thanks to the secret development of robots. That, in fact, is the plot of the plot. You are going to control robots in turn-based mode.
‹
›
Home
View web version