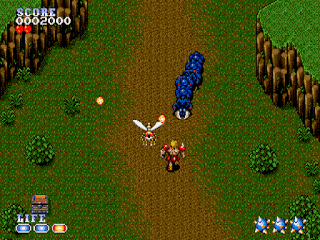 Genre: Action
Perspective: Top-down
Gameplay: Shooter
Published by: PAL SOFT
Developed by: T&E Soft
Released: 1991
Platform: SEGA Genesis / Mega Drive
A funny game in which you have to fight various monsters and evil spirits that are dropping at you in a scrolling shooter game. You are given six locations (levels) to choose from. These are various gloomy places, such as a cemetery, ruins of a house, forest, caves, etc. In all these levels you will have to face various monsters. Many of them just fly or run towards you. But the main difficulty is the shooting monsters. But you, too, do not attack them with your bare hands, you have standard weapons, and in addition to them you can improve them by collecting various bonuses. And use protective magic. You also have a shield to cover yourself with, protecting yourself. In the levels, various unexpected moments can occur, a bridge collapses, or a fire breaks out, etc.
‹
›
Home
View web version