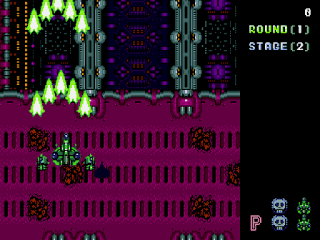 Genre: Action
Perspective: Top-down
Visual: 2D scrolling
Gameplay: Arcade, Shooter
Vehicular: Space flight
Published by: SEGA of America
Developed by: Toaplan Co.
Released: 1989
Platform: SEGA Genesis / Mega Drive
One of the very first Shoot 'em up games for the Sega Genesis game console back in 1989. The game turned out to be quite good, everything is quite traditional. You play as a spaceship with a fairly good arsenal. Your goal is to destroy everything that comes your way. The plot of the game is that the Armada Gidans, led by Dogurava, attack the space near the planet Borogo. They control five giant asteroids. The surviving pilot after the attack, at the orbital station, uses the last remaining fighter to repel the attack. The action of the game will unfold in outer space. There are five bosses in eight levels. The player can equip his spaceship with one of three weapons, the pole is still bombs. All this can be pumped into a very powerful weapon. And become practically invulnerable to standard enemies.
‹
›
Home
View web version