Treasure of the Rudras (SNES) 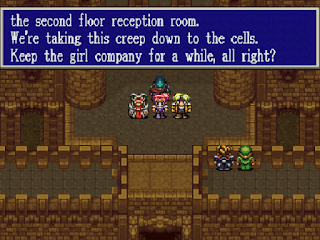 Genre: Role-Playing (RPG)
Perspective: Top-down
Visual: Isometric
Pacing: Turn-based
Setting: Fantasy
Published by: Square Co.
Developed by: Square Co.
Released: 1996
Platform: Super Nintendo (SNES)
The plot in this game revolves around the god Rudra, who wakes up every certain period of time and "resets" the world anew. That is, it destroys the old and creates a new one. We have to go through 3 scenarios to choose from by different characters, which take place in the same period of time, which is equal to 16 days. The paths of the characters can cross and in the end they all come together to give the final battle. Something similar was already in Seyken Densetsu 3. Actions develop a few days before the awakening of Rudra. The heroes must try to save the world from this deity and along the way solve their own problems and defeat personal enemies. Digression: I don’t understand this, what kind of personal enmity can happen when the world has only a few days left to live? They would all unite and try to save the world together, but no, they need to measure their strength. One villain suddenly wanted power, another, already the main character, suddenly felt like taking revenge. You first save the world, and then take revenge on whoever you want and as much as you like. That's what I can't understand. Of course, the gameplay is reminiscent of the Final Fantasy series. We also walk around cities, talk with residents, bit by bit we get a dose of plot development, walk around the global map, all the same random battles, the battles themselves are also made in the classical style: heroes on the right, monsters on the left, there are also physical attacks and magic . All the same fantasy atmosphere. There is nothing fundamentally new, but there are still some differences. For example, more difficult fights. The difficulty lies in the fact that by stupidly pumping characters this game is not so easy to overcome, although if you have a lot of time and patience, then this is possible. Here it is necessary to develop tactics, look for weaknesses in the bosses, select the appropriate equipment, in general, do what I love JRPG for - connect brains. Yes, all this is in the same Final Fantasy, but there you can score on it, raise a couple of levels and defeat the enemy. In Rudra no Hihou, this will not work, a couple of levels will not be enough here. The battles here are turn-based, that is, there is no Active Time Battle here. A lot depends on luck, bad luck, sometimes the enemy can make two moves in a row, which is usually very painful. There is also a very thoughtful and interesting system of magic. We write spells ourselves in a special menu. That is, it happens like this: in the game we find a scroll where a spell is written where some letter or two letters are missing and we need to write it correctly in the menu, picking up the missing characters. You can also try to write something at random, maybe bring something interesting, I managed to get the magic of the earth in this way, though it didn’t hit too hard. In short, the gameplay here is classic. The graphics here are quite good. Animation is great. Characters, backgrounds and maps are drawn very well. But the best part is that during the battles all the monsters are animated. This is something that Final Fantasy lacked so much where heroes fight static pictures. The animation of the enemies really enlivens the battle, and the animation is done at a decent level. This is the first thing that caught my eye. At the same time, the heroes themselves in battles are also animated smartly. And why couldn't this be done in SNES JRPG games? The musical accompaniment here is very good. There are both calm and dynamic motifs; for each situation and location, an appropriate musical composition is selected here. The genre here is mostly orchestra, but sometimes you can hear guitar riffs in the compositions, mostly in battles. The content of the compositions here is melodic and pleasant. Even in dynamic tracks they managed to keep a pleasant melody. And when the battle drags on, the music doesn't get boring. The technical performance is just as pleasing to the ear. Sometimes you just forget that this is a 16 bit game. Ten out of ten. This is a great game that every fan of the JRPG genre should appreciate. She did not bring anything new, but she qualitatively used old proven ideas from early Square games and even developed them in some way.
‹
›
Home
View web version