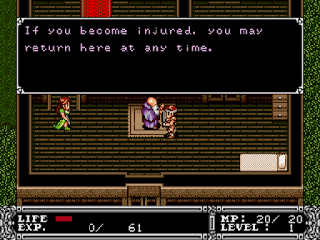 Genre: Role-Playing (RPG)
Perspective: Bird's-eye view
Visual: 2D scrolling
Gameplay: Action RPG
Setting: Fantasy
Published by: SEGA Enterprises Ltd.
Developed by: SEGA Enterprises Ltd.
Released: 1992
Platform: SEGA Genesis / Mega Drive
Nice arcade RPG with real-time battles like Diablo. A large number of all kinds of weapons that can be improved, a good arsenal of combat spells - magic. It can be used for both Mana and scrolls. There is no money in the game as such. So it won't work to buy anything. Only fight and knock out bonuses from enemies. You play the role of a boy who will become a real warrior in order to fight the forces of evil and prove something to someone. Good game.
‹
›
Home
View web version