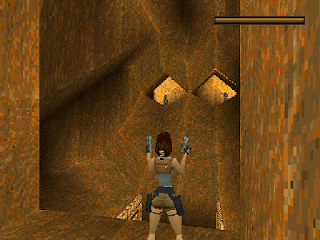 Genre: Action, DLC / Add-on
Perspective: Behind view
Gameplay: Platform, Puzzle elements
Interface: Direct control
Published by: Eidos
Developed by: Core Design Ltd.
Released: 1998
Platforms: PlayStation (PSX, PS1), DOS
In 1998, shortly after the release of Tomb Raider II, Tomb Raider was re-released for DOS and for the first time on Mac. Called Tomb Raider Gold in North America, and Tomb Raider: Unfinished Business in countries other than the original game, this version contains four new levels in two additional chapters. Here in this thread just this exclusive content is presented (four new levels in two additional chapters), which was previously only available on the PC. These levels were created at Eidos' San Francisco office by Phil Campbell, Rebecca Shearin and Gary LaRochelle. The first chapter of the game begins in Egypt a few months after the events of the original Tomb Raider II game. Lara returns to the city of Khamoon to investigate the mysterious statue of the Egyptian goddess Bast. The second chapter begins after the events of the original Tomb Raider and ends with the destruction of the last traces of the Atlantean race. It is in this version that Lara Croft has a pigtail.
‹
›
Home
View web version