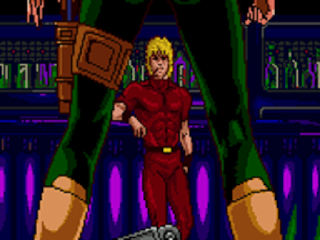 Genre: Adventure
Art: Anime / manga
Setting: Sci-fi / futuristic
Published by: Hudson Soft Company
Developed by: Hudson Soft Company
Released: 1994
Platform: SEGA CD / Mega-CD
The captivating game The Space Adventure - Cobra: The Legendary Bandit is based on the popular Japanese manga and anime series Cobra's Space Adventures by Buichi Terasawa. The game presents an adventure game with gameplay similar to Snatcher for the Sega Mega-CD. You will have a set of specific actions that you will choose to solve the problem posed to you. The game's plot is based on some of the first comics (manga), although it is slightly different. When our hero Cobra arrived at the Crazy-Horse bar, a surprise awaits us there. It turns out that the Galaxy Patrol has announced a bounty on your head. And now you are hunted by the girl - the bounty hunter Jane Royal. But only as long as you do not face the sworn enemy of Crystal Boy. He hunts for the treasure hidden by Jane's father. And he left the card for the treasure in encrypted form, like tattoos on his three daughters. You go in search of two more daughters to find treasure and, of course, learn a breathtaking story.
‹
›
Home
View web version