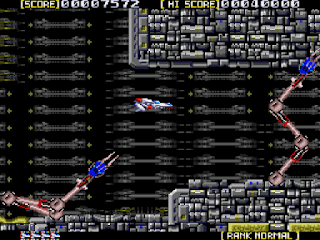 Genre: Action
Perspective: Side view
Visual: 2D scrolling
Gameplay: Shooter
Vehicular: Space flight
Setting: Sci-fi / futuristic
Published by: SEGA of America
Developed by: Wolf Team
Released: 1992
Platform: SEGA CD / Mega-CD
The Sol-Feace game belongs to the Shoot'Em Up genre, the game was originally released for the Sharp X68000, after which it was ported to the Sega Mega-CD and came out with it, and only then the Sol-Deace game was released for Genesis / MegaDrive. The game takes place in the distant future in the year 3300. Humanity has entrusted all the work of keeping order to an artificial intelligence computer named GCS-WT. Naturally, all military equipment is under his control. But everything did not go as we would like, and AI decided to enslave the whole world, and with everyone who resisted him, he brutally butchered. But the scientist Edwin Feace decided to confront him, he hides on the planet Cilius, where the rebels join him. He manages to assemble the Sol-Feace space fighter. But he does not have time to launch it to the masses, since GCS-WT gets to him. But pilot Eric Williams and gunner Misao Hatanaka decide to try to fight back GCS-WT and stop its tyranny. Help them in this difficult task over 6 levels: Sirius, Enemy Arsenal, ArtifiStar, Pluto Base, Almathea and the final battle with the leader (boss).
You will collect various bonuses that will add various weapons from above or below to your space fighter.
‹
›
Home
View web version