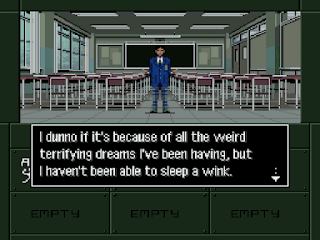 Genre: Role-Playing (RPG)
Perspective: 1st-person
Pacing: Turn-based
Setting: Cyberpunk / dark sci-fi
Published by: Atlus Co.
Developed by: Atlus Co.
Released: 1994
Platform: Super Nintendo (SNES)
Some people mistakenly consider it some kind of sequel or prequel to Shin Megami Tensei, but in general this game is an alternative scenario to the first part: “what if…” Tokyo was not destroyed?

So, the events unfold in the familiar Karukozaka High School: it was mysteriously transferred to another reality - the demonic world of Makai. The ritual that took the school to another reality was performed by the mysterious young man Ideo Hazama, who recently began studying at the school, but came across a "warm" reception from his classmates. Angry at this behavior of people, he took Karukozaka High School to the demonic world out of revenge. But not only that, the rage in him was so great that he could cope with strong demons in the world of Makai and became Majin-Nou - the supreme ruler over them.
In order to deal with an ambitious ruler who is angry with his classmates, you will need to explore the world of Makai. But you yourself understand - this is a demonic reality that completely and completely resembles hell. Not only will you have to fight hordes of demons, but also be prepared to face deadly sins: yes, the game raises a lot of philosophical questions about the nature and form of sins, albeit not in a theological manner. And all because the reality of demons consists of several worlds, which are based on these mortal sins. And depending on which student you team up with, you'll be forced to explore different Makai realities.

The main character of our game. Don't be surprised: you yourself choose the gender and name of the character (and, through answering questions, also quantitative indicators of the character's characteristics).
But the female avatar is not so faceless as it might seem at first glance. Meticulous players of the first Shin Megami Tensei: Persona should be familiar with this girl: Tamaki Uchida.

A student of Karukozaka High School who can join our party after the protagonist refuses to team up with Charlie and Yumi. Unlike all the other characters, she is more familiar with our main antagonist: he is secretly in love with her. Despite a small degree of narcissism and egocentrism, he has a kind heart and a bright soul.
It is the scenario with this girl that will reveal the true ending to you and show what exactly awakened fierce hatred in Ideo Hazama...

An egoist, passionately wanting to get home: he spat on the problems of his native school and classmates. Extremely impulsive: actions often outstrip the flow of thoughts.
At school, many people know him not by his first name, but by his nickname Charlie. The player is given the chance to have him on the team after refusing to team up with Yumi.

A liberal and cheerful girl who is deeply concerned about the fate of Karukozaka High School and everyone in it. She is the first of the students to offer to team up with the main character.

This student from Karukozaka High School has a rather unfortunate reputation as a daredevil, and his true motive is not the desire to return to his home world: he only wants revenge.
It will be available only after the first passage. And, unlike other scenarios, with him you will go not to one of the demonic worlds of Makai, but to a special tower.

So, since the game is some kind of alternative to Shin Megami Tensei, it is not surprising that it has similar gameplay and mechanics. Yes, as in any dungeon crawler, we will have to explore a lot of locations that look like labyrinths. The player has access to 4 directions with a first-person view. Nothing much has changed compared to the first part, so you will not be shocked by anything.
From the very beginning, you will be asked to create a character that will become our main character: a boy or a girl. The list of characteristics is standard: strength, agility, and survivability - everything is as it should be. That's just the quantitative parameter of the characteristics will depend on which answer options you chose during character creation.
Random turn-based combat is nothing new to the series. And the strange behavior of the RNG, which deliberately makes us fight hordes of opponents every 3-6 steps, is the norm for the series. The main focus is on equipment (a vital element - without good weapons and armor, nothing good shines on you in the fight against demons). You are free to attack the enemy (both melee and ranged weapons), use skills, defend and run away - everything is the same as in the first part. Communication with demons is also the norm for the series. With the help of these dialogues, you can get a minion (plus you can always synthesize a demon for yourself).
Among the features of Shin Megami Tensei: if… it is worth highlighting the appearance of protective spirits. After the character's death, some divine entity resurrects you and gives you an accompanying spirit. Depending on the type of spirit and your stats, you can either get a bonus to them or lower their value. But it's better not to die in the game at all (although this seems to be just inevitable - the difficulty of the first Shin Megami Tensei is quite high).
But the most important feature is the presence of a fork in the passage. Depending on which of the students you team up with from the very beginning of the game, different events and variations of the passage await you.
‹
›
Home
View web version